The Temple guardian is once again a pig I had no idea about until the Piglantic Temple as the creator did not put it's status.

Incompetent Minions: Attack power increased by 25% for each knocked out ally.

Boss of Piglantic Temple. It is super powerful but it's power is dwarfed by the Zombie Dunkleosteus. 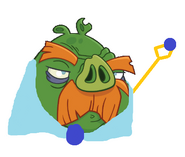 Add a photo to this gallery
Retrieved from "https://abcc.fandom.com/wiki/Temple_Guardian?oldid=7075"
Community content is available under CC-BY-SA unless otherwise noted.