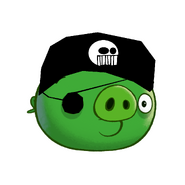 Add a photo to this gallery
This is the sequel to the new angry birds Epic 3 which I've seen in another wiki.

Like angry Birds Epic 3 it is a crossover. Above is a gallery of possible enemies of this game.

This game was released and it is a crossover between Angry Birds Epic, Powerpuff Girls and Camp Lakebottom.

About the Powerpuff girls:

The Powerpuff girls don't appear but the leader of the powerpunk girls (Berserk) makes her debut in Rovio games.

It feutures some of the beasts of Camp LB. Like a giant crab and Zombies.

-New Pig side mode is here, it is unlocked by completing 3 Boss battles. But that's another story.

He appears in level 1 as if this game was canon, it started after the battle of Wizpig castle.

He regains his abilitys but is weaker because he is level 1.

Regaining their abilitys the top secret boss has returned!

He will also summon a weaker drone as support every 3 turns.

Yes she even returns in RPG

Vengeful Reinforcements: If attacked there is a 20% chance to summon a Soldier Pig for support.

The main antagonist of the game

Annoying :Increases attack power of all ally's by 10%.

Fight her in the powerpunk girls house.

Retrieved from "https://abcc.fandom.com/wiki/Angry_Birds_Epic_4?oldid=7063"
Community content is available under CC-BY-SA unless otherwise noted.